Blowing up a nuclear facility is the same as launching a nuclear weapon against that nation. That the USA and Israel are campaigning in public to go down that holocaust road makes one wonder what the Jews forgot about never forgetting the holocaust, lest it happen again.

Both USA and Israel are demonstrating to the world that they are the rogue, out of control terrorist nations that they claim Iran to be.

Stop terrorizing the world citizens with threats of a nuclear holocaust created by you. Curb your own terrorist ways and maybe the world will follow your lead and also act responsibly. Right now the USA and Israel are the only nuclear terrorists on the world block.

This isn’t about preventing a nuclear arms race, it’s about using those weapons, and so far Israel and the USA are the only ones threatening via the world stage to use them against Iran. The Israelis and Americans think they found a loophole by not actually launching a nuclear warhead against Iran. Again, using a non-nuclear weapon to blow up Iran’s nuclear facilities is the same thing as launching a nuclear weapon against that country. The threat in itself is an act of nuclear terrorism.

Attacking a country’s ‘nuclear computers’ is the same as launching a nuclear weapon against that nation. Disabling the computer systems that control operations will create a melt-down situation. Perhaps it wasn’t the tsunami that created Japan’s nuclear disaster. Perhaps the USA in their well-publicized campaign to disable Iran’s nuclear computers missed their mark.

Earlier this year the USA bragged to the world that Iran’s nuclear capabilities had been put out of business–disabled via their own nuclear sabotage efforts. Now they want to bomb them. So it looks like they did miss their mark. How many more ‘nuclear accidents’ is the world going to tolerate?

Who are the nuclear terrorists again? 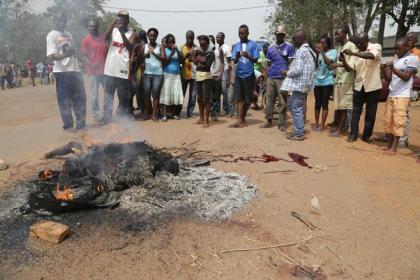